Secondment at BBC News: Expanding my skill set as a consultant statistician 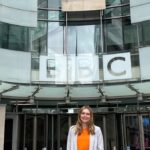 I read the advert for the Government Statistical Service (GSS) secondment at BBC News in a departmental GSS email and it was the first time I had heard of the opportunity. I recalled attending a talk by Robert Cuffe, Head of Statistics for BBC News, which had been organised by my Head of Profession at Ministry of Justice (MoJ). Robert’s speed at interpreting a statistical publication was impressive and I knew the secondment would be an excellent chance to learn from him.

This secondment was a new challenge for me. I had worked on data analysis at MoJ since graduating, and therefore I wanted to see whether I could apply my statistical skillset to various news topics across the BBC.

On reflection, I achieved even more than I anticipated during the secondment.

Every day working at BBC News was different. However, a typical day involved reviewing a statistical release at 9.30am with Robert and summarising the main points for journalists. This summary was normally emailed to all journalists by 9.40am, which shows how quickly journalists interpret Government publications. As I became more familiar with the role, I advised journalists on their script for the 1 or 6 o’clock news programmes broadcast on BBC One and assisted Robert in providing accurate and concise wording for news articles. I enjoyed following statistics across the various BBC News outlets throughout the day – a personal highlight was seeing my name next to ‘Breaking News’ on the BBC News live page when covering the Office for National Statistics (ONS) weekly deaths publication on coronavirus (COVID-19).

Additionally, I responded to various requests from journalists across the wider BBC network, including those from BBC Three, Newsnight, BBC Radio 4 and The One Show. I helped journalists to interpret their Freedom Of Information responses, find appropriate statistical sources for stories and ensure that surveys were reliable and reported on within specific guidelines. One of my main responsibilities was to ensure that the main caveats were highlighted in news outlets to provide the audience with an accurate picture of statistics. For example, Newsnight had requested information from all UK police forces and discovered that the prosecution rate of domestic abuse was only 4% when the defendant was a police officer. I fact-checked the programme script and asked the journalists involved to include the number of police officers who had an allegation of domestic abuse and the prosecution rate for domestic abuse for all offenders. This allowed users to make a fair comparison between the prosecution rate for police officers and the prosecution rate across all offenders.

After a month in the role, I handled several requests at once while also responding to calls from the main health correspondent, Hugh Pym, to provide advice on how to report on infection levels across the UK (using data I interpreted from the ONS weekly infection survey). I would have been surprised if someone had told me I could do that three months ago!

As I had experience using R studio from my previous role at MOJ, I was also able to produce charts for BBC News. I particularly enjoyed producing a chart to show the increasing proportion of cases attributed to the delta variant when the variant was becoming a concern in the UK. The data journalists have built impressive packages to tailor any chart to BBC colours and formatting to ensure consistency, which I hope to share at MoJ.

I was able to attend National Broadcasting House a few times during my secondment. It was interesting to hear the conversations about COVID-19 from the health journalists, especially when there had been an announcement from the Government. I was also fortunate enough to shadow the filming of BBC News, watch Robert talk about infection levels on Radio 4 and learn how Hugh Pym puts together a segment for the six o’clock news programme.

I now have a greater appreciation for how journalists work and how quickly they must find and interpret our statistics, which I will carry with me throughout my career to ensure our publications are tailored to one of our main users. It is helpful to highlight the main points and ensure that the main caveats of the statistics are clear.

Overall, I would highly recommend this secondment. Robert is an excellent supervisor and I have learnt many skills that I will now transfer to my new role at MoJ.

Kristina is a Senior Statistical Officer at Ministry of Justice, currently working on providing an evidence base for young offenders using linked data from Department for Education. Prior to this, she worked on various National Statistics, produced dashboards for the Judiciary and conducted impact evaluations.